To coincide with the launch of his new book, an exposé of the “despicable” captive-bred lion industry in South Africa, UK businessman, philanthropist and former Deputy Chairman of the Conservative Party, Lord Ashcroft has posted the video below which reveals some shocking truths about SA’s terrible trade. 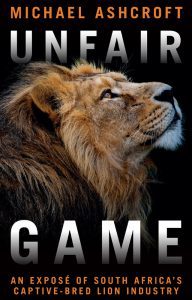 In this latest intense undercover investigation Operation Chastise, commissioned by Lord Ashcroft in April 2019, top security force officials infiltrated some of SA’s lion farms where thousands of Africa’s most iconic animals are bred to satisfy the market for hunting trophies, and to supply bones to the market for “so-called medicines in China and the Far East”, he says.

There are now 12,000 captive lions in SA; and only 3,000 wild. And contrary to some claims that keeping them captive ensures the species survival, the book provides evidence that the opposite is true and wild lions are now more at risk than ever.

Please note: the video is distressing and within three minutes your heart will be broken, but imagine if we all look away and do nothing… and let this continue.

Which, as it turns out, is what some SA officials seem willing to do.

Lord Ashcroft says that after Operation Chastise concluded in December 2019, “my team took their findings to one of South Africa’s most senior police officers in charge of wildlife, but instead of accepting the dossier of evidence they had prepared, he threatened to arrest them and gave the evidence back!”

The royalties from ‘Unfair Game’, which is published tomorrow, will go to charities that are working to halt what Lord Ashcroft calls “South Africa’s despicable captive-bred lion industry”.

He says he is “determined” to put it right.